“Cuteness” is a concept that received lots of attention not only from the vast population of the Internet, but from psychologists and neurologists as well. For example, usually brain activity (using fMRI, like in work of Kim and Hamann) is greater when the stimulus has infant-like characteristics, like big eyes, fat cheeks, or a large head, which is an evolutionary trait forcing us to take care of infants and gain positive emotions towards them (and that’s the secret why the Internet likes cats!). Basic six emotions – happiness, sadness, anger, disgust, surprise and fear – have received a lot of attention in computer science, ranging from emotion and expression detection and tracking to animation. However, cuteness as a higher concept, has not been investigated in computer science until recently, when Wang et al. from Renssealer Polytechnic Institute, Signapore Polytechnic and University of California a couple of days ago published a model that learns from human images and their cuteness ratings to produce human-like evaluation of cuteness, which is considered an objective quality, at least in the most part of the evaluation. This framework could be used to evaluate other higher-order concepts as well, like, for example, being funny.


The data set used was annotated by humans (40 subjects) using different cuteness scores for each image (4800 images), and in each round of annotation, subjects were required to rank a number of images in a descending order of their score. The attributes used were middle-level descriptors of certain person’s characteristic: Gender (Male, Female), Age (Young, Teen, Middle, Old), Eye (Open, Close), Mouth Variation, Mouth (Open, Close), Teeth (Visible, Invisible), Smile, Wearing Glasses, Beard, Skin Color (Bright, Dark), Hair Color (Black, Blonde, Other), Hair Ornaments, Face Cover and Skin Smoothness. The cuteness degree of a person is found to rely heavily not only on appearance, but on pose as well. 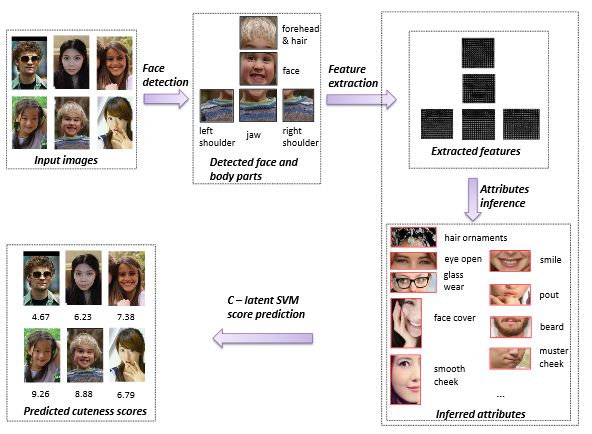 The framework of cuteness prediction

A machine learning model will be trained and then it could automatically learn which features and attributes determine the cuteness of a person. Usually a latent SVM detector is used for attributes mining and prediction, which had been introduced for object detection and action recognition. Latent SVM for each instance xi finds a feature mapping φ that maximizes the confidence of the model on the sample. For example, it could include a set of different sub-models for various poses and a scoring function would determine which is the best one. The difference here is that for the cuteness prediction, sample annotations are continuous values, and not discrete ones like in traditional latent SVMs, so the researches proposed a novel Continuous Latent SVM (C-LSVM), which could be seen as a more general model.

Examples of the inferred attributes

After the model learns the prediction functions and parameters, the cuteness score can be inferred as follows:

(where x is a raw feature, a is an attribute, y is a cuteness score, and z is a combination of parameters for optimization). The proposed model was evaluated on 3000 images, and the C-LSVM method gains, in comparison with other methods, the best error-rate. So, try it out – and if it fails on you, blame it on the poor parameters!