Neuroscientists and biologists have investigated zebrafish for quite a while, since they have much more in common than meets the eye. There is, of course, one obvious difference: they move in three dimensions while swimming. Therefore, it was interesting to track fish to collect information about the third dimension of depth, which is usually missing from camera tracking. Usually we do not track in 3D since there are computing and technological limitations (two synchronized cameras, calibration of the testing arena), but researchers have proposed 3D tracking to understand better their trajectories and neurological background. To learn more about zebrafish and similar organisms can help us learn more about human brain phenotypes, which could be useful in neuropsychiatric research. Zebrafish also provide low-cost technologies, which can be implemented quickly.


A group of researchers have introduced a new automated method for generating 3D (X, Y, Z) swim trajectories in adult zebrafish (Danio rerio) to improve their neurophenotyping. They have used the tracking software to enhance the efficient high-throughput 3D analyses of behavioural responses of different zebrafish. This approach illustrates the value od 3D swim path reconstructions to identify experimentally-evoked phenotypic profiles. This is also useful for drug testing, since this method is highly sensitive to various classes of psychotropic drugs, such as selected psychostimulant and hallucinogenic agents. 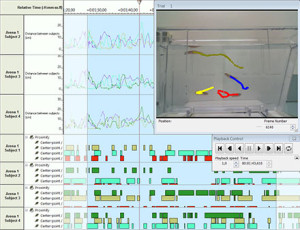 Back then in 2010 researchers from the University of Leiden investigated the pattern of exploratory behaviors in adult zebrafish when exposed to an unfamiliar environment. They reported that zebrafish display anxiety-like behaviors including dark-avoidance and thigmotaxis (the movement of an organism either towards or away from the stimulus of physical contact). To continue, they have tracked the fish to conclude that they, upon exposure to a novel environment in the first two minutes – they display preference for the outer one of the testing apparatus, where they seek escape via the transparent wall, and exhibit high locomotor activity and high swimming speed. The next finding was that thigmotaxis. hyperactivity, and swimming speed decrease over time. The last result was that the prior history of stress attenuates the natural tendency to engage in dark-avoidance behavior and thigmotaxis. These findings taken together that novel environment can elicit anxiety-like behavior in zebrafish, which is consistent with previous finding in rodents, and provides an insight into neuroscientific background of such manifestations.

In 2012 researchers from the University of San Diego have examined depth preference in adult zebrafish too. They used a modified visual cliff apparatus, which could be arranged so that the distance from the water surface and distance from the substrate could be independently manipulated. In one condition subjects showed a powerful preference for the deeper side – when two sides of the apparatus genuinely differed in depth. In the other one the both sides of the tank were set to the same depth using a glass insert, and one side appeared deeper because of the gravel substrate just below the glass floor on one side, and far below the glass floor on the other (like the visual cliff). In this case zebrafish preferred the side that appeared deeper, unlike the terrestrial animals that tend to avoid it. It appeared that the escape from the surface, rather than approach to the substrate, motivated the diving response in zebrafish.